Trident Engineering Associates, Inc., was retained to determine the reason for a fire sprinkler’s failure to discharge.

A dry fire sprinkler installed in a condominium unit balcony failed to properly discharge water to extinguish a fire. As a result, the fire spread and caused extensive damage to the remainder of the building. The subject sprinkler was damaged in the fire and its pre-fire condition could not be determined.

Undamaged sprinklers from the same installation were pressure tested. Testing showed they required higher water pressures to discharge than specified. A detailed examination showed that water from the fire suppression system had seeped past the seal on the plug which separated the sprinkler from the water supply. This water allowed the formation of corrosion products which kept the plug from moving when activated by the heat from the fire.

Corrosion of the steel pipe was a result of the sprinkler being connected to copper supply lines. The copper line was an inappropriate material selection because it created a galvanic couple with the steel pipe and accelerated steel corrosion.

The plug’s failure to move when activated by the heat from the fire allowed the fire to spread, causing over a million dollars in damage.

The root cause of the failure to operate was the use of copper supply pipe rather than steel pipe; an inappropriate, and poor, material selection.

The photographs below show the construction of the sprinkler and the subtle corrosion which had a major consequence.

A “dry” fire sprinkler from a burned condominium. Connecting the copper to the steel accelerated corrosion of the seal. 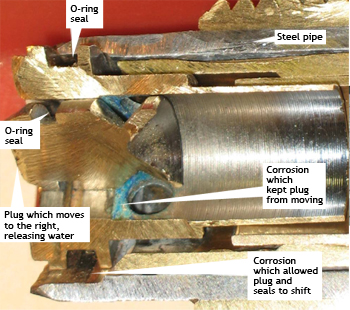 The interior arrangement of the metal parts comprising the end of the sprinkler assembly is shown after sectioning. When installed, the water supply line is to the left of the plug; the space to the right of the plug is dry.

Trident’s analysis provided a clear explanation of the sprinkler’s failure to operate. A jury found the selection of copper pipe to be inappropriate and Trident’s client was able to reach a satisfactory settlement with the installer’s insurance company.