A 100+ year old structure located in Western Maryland was being renovated and converted into luxury apartments.The overall structure was sound, and it was completely gutted and retrofitted with new, modern utilities, including an elevator. Three new
service entry cables, both 3 phase and single phase, were routed through and under ground floor 2×12 interior ceiling joists and connected to panel boxes at the rear of the structure. The joists were solid oak and actually measured 2″x12″.

Early one morning, a fire occurred inside the building. The local Fire Marshal placed the source at one of the service entry cables that ran through the interior of the structure. These cables were fastened to the undersides of the ground floor ceiling joists at the front of the building, and they then transitioned to holes drilled in the center of the joists for the remainder of the run to the service panels located at the rear of the structure. The source of the fire was placed over six feet from the transition points of the three service entry cables. The building owner brought suit against the electrical contractor who had installed the cables and rewired the structure.

Plaintiff’s experts opined that a bend in the cables at the transition point caused one of them (the one identified as the source of the fire by the local Fire Marshall) to short circuit, and that moisture on the surface of this cable allowed surface arc tracking to extend over six feet along the cable from the transition point to the point of origin and ignite the oak floor joist at this point. Plaintiff’s experts offered weather data collected at an airport several miles from the fire scene that showed that dew point temperature occurred at the airport several hours before the fire. Trident was asked by the defendant, the electrical contractor, to help investigate the claims.

In an effort to help clear the fog, Trident built a replica of the ceiling joist cable transition using exemplar cable and oak lumber specially cut by a local sawmill to duplicate the ceiling joists. The replica showed that the radius of the bend in the service entry cable was within the 5x cable diameter specifications of the NEC. We then energized the cable and subjected it to months of temperature and humidity cycling patterned after weather data (from the nearby airport) referenced by plaintiff. Megger readings were taken at regular intervals throughout the test cycle. At the end of the test period, the integrity of the cable insulation was found to be the same as it was at the beginning of the testing. There was no insulation breakdown what-so-ever.

Trident investigated the weather data referenced by plaintiff and determined that the readings were taken at a weather station located outside of the “nearby” airport, approximately three feet above grass covered earth. Trident then established through testing and research that dew point and relative humidity readings taken inside a closed structure such as the loss site, which was located within the limits of a small city, varied considerably from readings taken outdoors, in an open area, several feet above bare ground level. We concluded that data offered by plaintiff did not accurately depict conditions at the loss site, that dew point temperature was not reached within the closed interior of the fire site building on the morning of the fire, and that the subject service entry cables were not covered with moisture as opined by plaintiff’s experts.

Finally, we demonstrated that arc tracking across the cable surface, even if it had occurred, would have not been able to extend six feet over a cable surface fastened with plastic clamps to floor joists spaced at one foot intervals. Our findings showed that the intervening ceiling joists and clamps would have interrupted the surface tracking and prevented it from traveling six feet or more to the point of origin of the fire. Trident’s findings were shared with plaintiff.

Nevertheless, plaintiff elected to proceed with trying the case in court. Trident transported the ceiling joist cable transition model to the court room so that it could be viewed by the jury. We received the court’s permission to megger test the model in the court room. We also prepared visual displays of our other test results as well as visual displays of the weather data involved. The various displays conveyed our findings in a straight forward, simplistic manner that was easily understood by the jury.

Near the end of the trial, just before jury instruction, plaintiff accepted a settlement offer that had been made earlier by the defendant, and the matter was concluded. 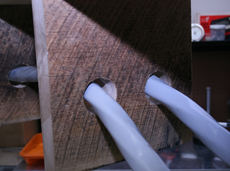 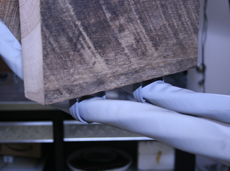 Cable clamped to underside of joist.