Trident Engineering was retained by a major insurance company to determine the cause of failure of several residential and commercial buildings in Cameron, Louisiana, following Hurricane Ike.  Hurricane Ike made landfall near Galveston, Texas, with winds up to 110 MPH. Although the storm made landfall as a category 2 hurricane its storm surge was comparable to that of a category 4 storm. In Cameron, the surge was as much as 7 feet deep with waves of 3.5 feet. Nearly every low-lying building suffered severe damage.

Utilizing advanced weather model data and a comprehensive structural analysis, Trident was able to prove that storm surge forces, not wind, was responsible for the failure in Cameron. Trident relied upon peer reviewed and accepted references such as ASCE 7-05 Minimum Design Loads for Buildings and Other Structures and FEMA-55 Coastal Construction Manual to perform a comprehensive load analysis. The dimensions and construction features of the buildings were extracted from pre-loss photographs. Wind and storm surge loads were then applied to the structures and compared with typical resistance values. Results showed that the wind forces were not sufficient to cause major structural damage or gross movement of the buildings. Site visits were performed to confirm site features, examine physical evidence, and observe damage to adjacent buildings. The majority of adjacent structures suffered only minor wind damage. Pre- and post-event aerial photos were also used to determine the features and orientation of the subject properties.

Trident provided its client with a clear, objective, and technically sound analysis. Our experienced engineers understand the needs of the insurance and legal industries for fair and objective determinations. Our conclusions are based on sound evidence, fact, and engineering judgment. 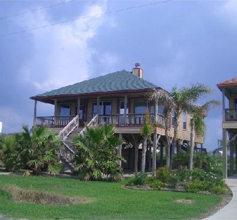 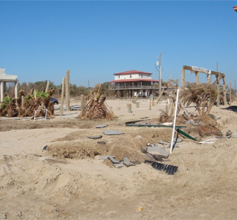 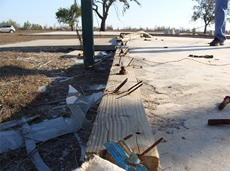 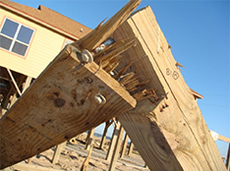